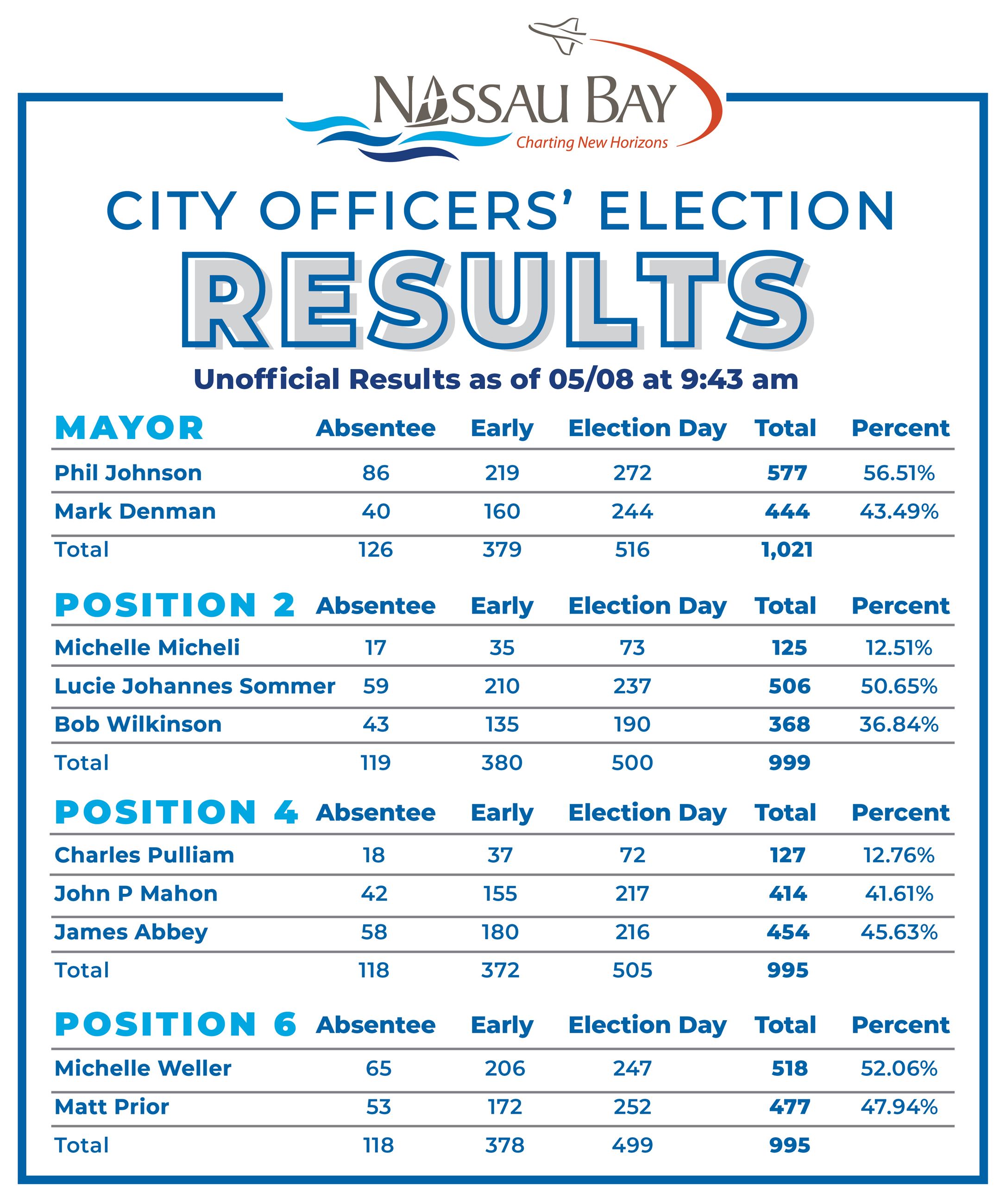 The Nassau Bay City Council Election is held on the first Saturday in May of each year. The next General Election will be Saturday, May 7, 2022, at 1800 Space Park Drive, Suite 200, Nassau Bay, Texas 77058. Each even numbered year, the Mayor and three (3) Councilmembers shall be elected with the councilmembers filling positions 2, 4, and 6.

The City Council candidates that will be presented on City’s ballot:

IMPORTANT INFORMATION REGARDING THE MAY 7TH CITY OFFICERS ELECTION - APRIL 29, 2022

We are aware that some Nassau Bay voters were provided an incomplete ballot during early voting, a ballot which did not include the City of Nassau Bay General Election ballot, ONLY the two State of Texas Propositions.

The City of Nassau Bay is actively working with the Harris County Elections Division to ensure that every Nassau Bay voter is presented the correct ballot.

Should you go to a polling location and are not provided a ballot with the City Council election, DO NOT cast your vote. You can cancel and be afforded the option to return at a later date and time. If this does occur, please contact the Harris County Elections Division at 713-755-6965 to rectify the issue.

Early voting by personal appearance will be conducted through the Harris County Elections Division as the City of Nassau Bay has entered into a Joint Election Agreement with Harris County for the conduct of the election.

Early voting by personal appearance will be conducted by Harris County beginning Monday, April 25, 2022 and ending Tuesday, May 3, 2022. Hours of early voting are:

Completed applications to vote by mail shall be sent to: Isabel Longoria, Harris Elections Administrator, Attn: Elections Division, P.O. Box 1148, Houston, TX 77251-1148. Applications for ballot by mail must be received no later than the close of business on April 26, 2022. More information is available at HarrisVotes.com/VoteByMail.

Please click on the Election Menu to view more information on each of the candidates, including candidate biography and photo.

[Updated 02.22.22 at 10:00am] Additional related forms, including Certificates of Withdrawl

Filing requirements are per state statute, and available at www.sos.state.tx.us/elections/candidates/guide/2020/local.shtml.

Candidate applications may be filed:

Drawing for the Order of Names on the Ballot: